Britta Marakatt-Labba, born in Idivuoma in 1951, is one of Sweden’s most renowned artists. We are very proud to show her first large retrospective south of the Sami lands. 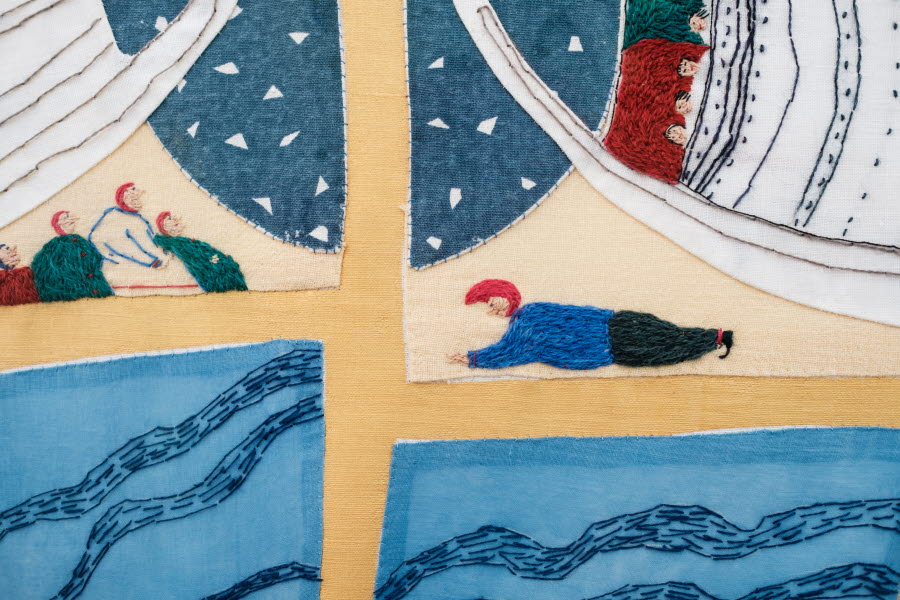 Many visitors to last year’s documenta 14 in Athens and Kassel were impressed and touched by the 24 metre-long 'Historjá' (History). Our exhibition features a reproduction of and sketches for this work. Permanently installed at the University of Tromsø, it may be called a contemporary history painting (although it is embroidered, and although it is based on oral tradition rather than on recorded knowledge). Marakatt-Labba’s magnificent frieze oscillates between the verifiable and the mythical. It reminds us, not least, that the history of her own people has long been kept invisible.

Other works in the exhibition also convey important events: past, present and future. 'Garjját' (The Crows, 1983) visualises protests against the damming of the Alta river in Finnmark, northern Norway, in the early 1980s. 'Johtin' (The Move, 2016) maps how mining forces the move of the entire city centre of Kiruna, already emblematic of colonial resource extraction. 'Máilmmiviidosaš liegganeapmi' (Global Warming, 2009) foresees what may happen to Sàpmi if the average annual temperature rises by just one or two degrees.

Marakatt-Labba’s themes and her modes of vision connect with Sami reality, but so do her chosen textile techniques: embroidery and appliqué. Her visual stories often converge with what in Northern Sami is called 'duodji' (applied art, design). They are, in other words, political in various dimensions. They challenge and expand the notion of art. They resurrect nearly erased memories, critique contemporary life and warn against possible, undesirable futures.

Warm thanks to Britta Marakatt-Labba for her involvement and collaboration, and to all the lenders, institutions as well as individuals, on both sides of the Swedish-Norwegian border.