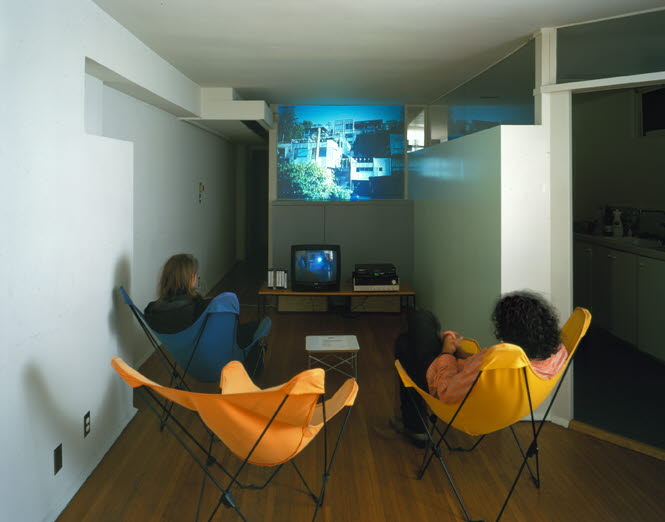 "Six architects respond to a kind of architectural Rorschach test", a work in the form of an archive, was comprised of interviews with six Los Angeles based architects. In what was envisaged as a sort of architect-specific Rorschach test, each was asked to comment upon a series of eighty slides (a full carousel) depicting housing stock—mainly multiunit dwellings—documented by the artists in and around Los Angeles. One hour in duration (the length of a consumer mini-dv tape), each interview was videotaped on two cameras. One camera recorded the interview subject, the other, the slides upon which they commented. In order to achieve a statistically broad selection of architects, as well as to limit the control the work’s authors’ wielded in the process of selection—selection itself regarded as prejudicial to the ostensibly "scientific" results to be attained—the artists chose to defer in part their agency in choosing the interview subject through the following process: as a first step, they invited three architects—a young architect, a mid-career architect, and a senior, or, emeritus architect—to participate; each in turn was asked to recommend a second for inclusion in the project. The only requirements were that the architects in question have a practice based in Los Angeles, and that each had worked on residential projects.

A presupposition of the project was the artists’ understanding of architecture as a discipline of social engineering in which relationships between persons and classes are modulated. It is a discipline determined by a relationship to technology and materials, between existing zoning codes and building ordinances (in other words, between the subject and the law), and finally, a relationship between practitioners and the local conditions of possibility under which they work (the givens of economic feasibility, prevailing weather conditions and architectural tradition: in the case of Los Angeles, private or public financing, clement weather and a tradition of modernist architectural production, historicism revivals, and revisions of architectural vernaculars (most notably Mission Revival and Spanish Colonial). This conception, therefore, explicitly links the architectural profession to history, location, and a body of technologies and legal codes. 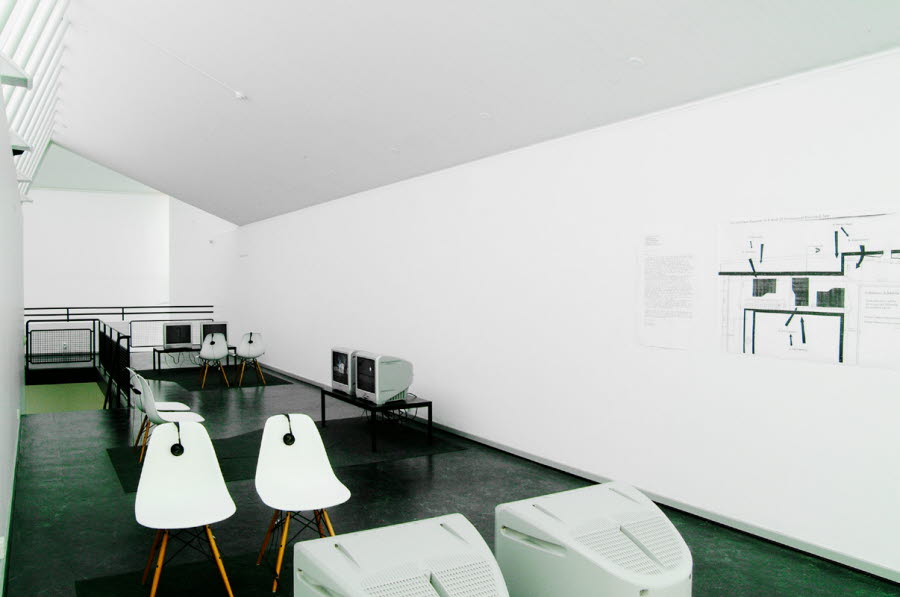 In the interview situation, the subject was given control of the projector’s remote. She/he could thus determine the pace of the interview and manipulate at will the order of the slides, going forward or backward, returning to an earlier slide to illustrate a point, or moving rapidly ahead with only minimal comment. The interlocutors allowed them to ask questions should a comment by the interview subject warrant further elaboration, but were otherwise mindful of keeping their interjections to a minimum. In this way, the artists attempted to approximate the psychiatric-test situation, not in order to reveal some psychic truth concerning the architect, but to uncover the manner in which architects relate to their discipline in ways they might not consciously be aware of. Thus, a body of knowledge indicative of the circumstances under which the profession of architecture is practised in Los Angeles gained expression through the cumulative interviews.

The initial exhibition of "Six architects respond to a kind of architectural Rorschach test" occurred at MAK Center’s LA residency, the R. M. Schindler-designed Mackey Apartments, in the same room as the interviews. They were shown one at a time, in chronological order. Concurrently, a slide projector set on auto-advance worked through the architectural Rorschach test slides, which were projected from the outside, against the same picture window as was used in the original interviews as a projection screen. In the now extended version of the Video Archive at Lund Konsthall, the interviews will be shown in groups of three, alternating the interviews featuring the architects chosen by the artists with those chosen by their initial three subjects on successive days. The monitors and chairs for viewing will be arranged on three rugs, the shape of which conforms to the dimensions of the living room/studio in the Mackey Apartment.