Lunds konsthall is now showing a concentrate of Cecilia Edefalk’s art from 2002 onwards, highlighting some works that rework and reinterpret the antique sculptural heritage. 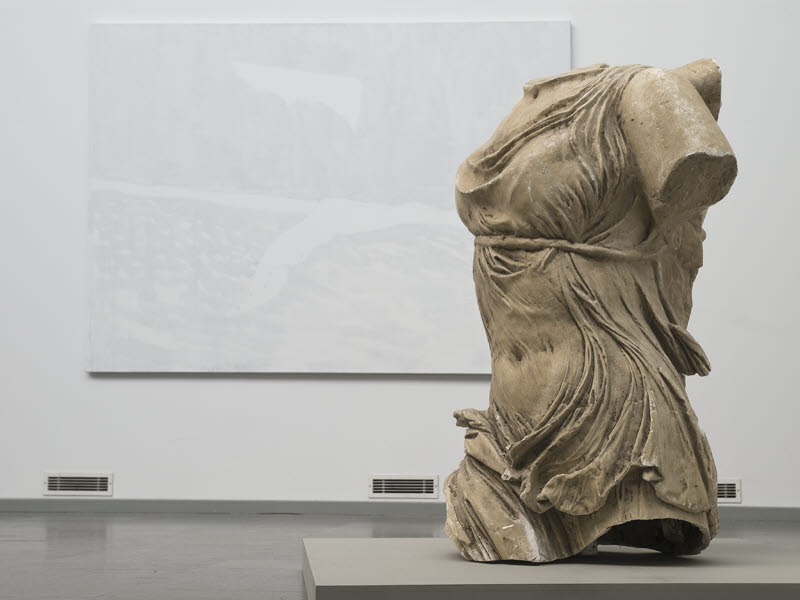 Since the late 1980s Cecilia Edefalk has been one of the leading and most sought-after Swedish artists at home and abroad. Her production is substantial, but there have been relatively few comprehensive survey exhibitions of her paintings, sculptures, photographs and films. Lunds konsthall is now showing a concentrate of Cecilia Edefalk’s art from 2002 onwards, highlighting some works that rework and reinterpret the antique sculptural heritage.

This is the first time a Swedish audience gets to see To View the Painting from Within. The original version of thisseries of blue paintings, was premiered at Documenta 11 in 2002. The starting point is a finely worked white marble portrait of the young Marcus Aurelius, the Roman emperor known as the ‘philosopher on the throne’.
A battered fragment of this sculpture is painted from different angles, evoking the phases of the moon as an image of the passage of time, of continuity and decay.

Three new bronze objects have been cast from the same face that modelled for the painted series. They are commented by Cecilia Edefalk’s documentary and poetic film, Portraits of a Sculpture, from the Herman Bergman Art Foundry in Stockholm. That is also where she found the original for the sculpture Minne, a simple wooden support used for touching up bronze sculptures. The foundry has also lent us several plaster casts from antique originals.

The series Double White Venus depicts classical sculpture in one of its oldest and most banal functions, that of mass-produced ornament for parks and gardens. Paradoxically, by pushing the painterly representation ever further into rudimentary sketchiness the artist allows the de-individualised statue of Venus to impress itself with increased clarity on the viewer’s memory.

The white ‘Diving Paintings’ derive from a present-day Venus. The motif is a photograph of a woman about to cut through the surface of a lit swimming-pool, accidentally found lying on the ground. Her arched naked body conveys the same harmony in movement as antique sculpture.

Precisely the contingent and the inexplicable are important sources of inspiration for Cecilia Edefalk’s art. The new text-based work for Lunds konsthall, Histories for the Future, invites us to join a series of conversations between the artist and August Strindberg, the great ‘first person’ of Swedish literature. The artist identifies herself as ‘she’, but also makes the other’s self-imposed male authority her own. The occult meeting of ‘August’ and ‘her’ becomes an image of the artist’s condition, its swings from self-assertion to fundamental doubt.

We thank all lenders, the Herman Bergman Art Foundry and Brändström & Stene in Stockholm for their significant assistance in realising the exhibition.