Ellipsis features photography, film and video from the 1970s and the early 1980s by Chantal Akerman (b. 1950), Lili Dujourie (b. 1941) and Francesca Woodman (1958–81). This is the first joint exhibition of their work, curated by Lynne Cooke, Chief Curator at Dia Center for the Arts in New York. Organised by Museo Tamayo Are Contemporáneo, Instituto de Bellas Artes, Mexico City. 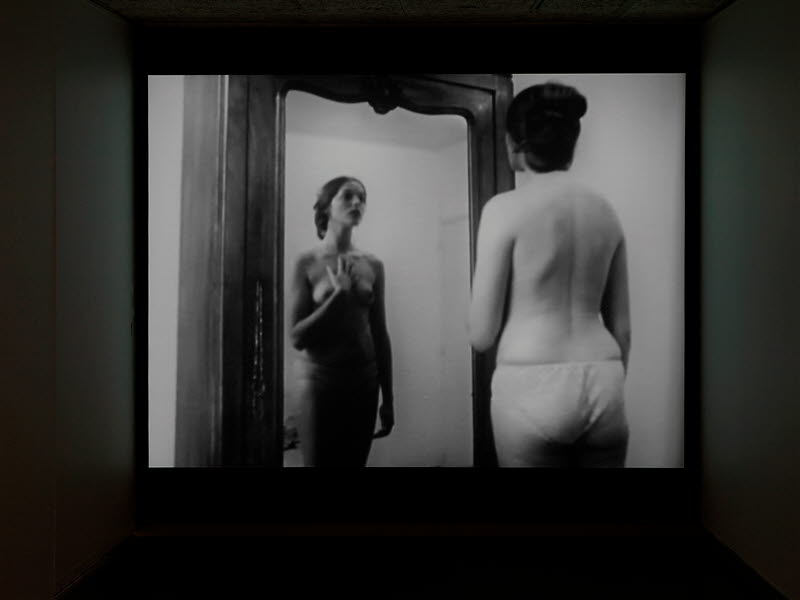 Lynne Cooke writes:
Although born ten years apart and in very different circumstances, the three artists featured in this exhibition each profited from the turn to still photography, and other lens-based technologies – film, slide projection and the newer medium of video – that dominated vanguard art practice in the late 1960s. Taking themselves – their bodies and their immediate circumstances – as their point of departure, during the 1970s all three made performative work for the camera. Tellingly, the sites they favored were mostly their own studios or domestic interiors. Beyond this quite evident concurrence of interest in the self as both artist and model, as subject and object of the gaze, there runs a deeper if more elusive thread that links their art from this period. Less a mood than a state of being, or frame of mind, its content could be described in existential terms as the estranged relation of the female subject to her world; in the terminology of current critical discourse, their abiding preoccupations centered on the construction and representation of identity.

The words Hommage à followed by an ellipsis (…) form the title of the first five of the seventeen videos Lili Dujourie produced between 1972 and 1981. Numerous names come to mind to complete this phrase, among them the Italian filmmaker Michelangelo Antonioni. Of particular interest to this exhibition is the proposal of a relation between the artworks of Akerman, Dujourie and Woodman and the films of Antonioni. The fragility and precariousness of his principal characters is evidenced in the ways in which their identities seem to split, double or dissipate so that each becomes unable to find coherence in a shifting amorphous world, and so verges on alienation. Through a signature language centered in an innovative treatment of space and time, Antonioni forged new formal and conceptual means to explore the identities of his subjects, means which resonate tellingly in the works of these three artists.

Ellipsis premiered at Museo Tamayo in Mexico City in October 2007. From Lund Konsthall it goes to DCA in Dundee later in 2008. The exhibition is accompanied by an illustrated catalogue (in English, Spanish and Swedish) with new essays by Lynne Cooke and Jan Avgikos.

Lund Konsthall is proud to present this dense and inquisitive exhibition, and to be part of this collaboration between institutions and intellectuals.