Bruno Knutman. Wolf at the door

Bruno Knutman’s latest substantial solo exhibition was a retrospective at Lunds konsthall 28 years ago, in the spring of 1982. This new comprehensive show of his work focuses on oil paintings from the intensely creative last five years, but it also comprises a number of drawings from the 1960s, 1970s and 1980s and a selection of gouaches from the early 1990s onwards. 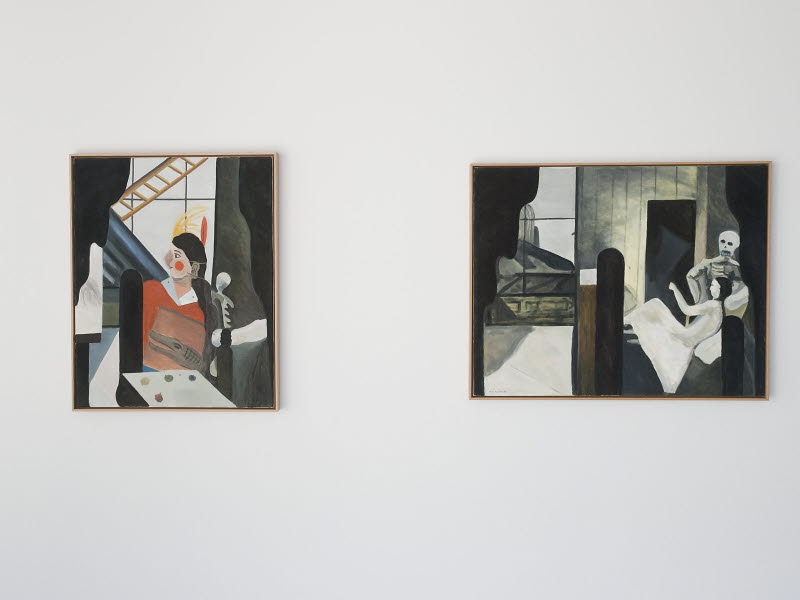 Swedish painter Bruno Knutman (born 1930) is an artists’ artist, much respected by younger colleagues. But many others are also attracted by his visual individualism, by his career outside of current movements in art and his superior lack of interest in any conventional notion of quality. He knows how to discard all acquired knowledge to arrive where he must arrive with each new image – at a constantly new visual account of his own self.

Many of the motifs in this exhibition go back to the time of the Second World War, while the approach to painting and drawing is contemporary and forward-looking. The newest paintings show us life before and during the war as premonitions, predictions, projections. The exhibition is named after one of these works, Wolf at the Door, which conveys precisely such a looming threat in a pre-war urban reality.

Bruno Knutman’s images are either imaginary snapshots or visual riddles made up of diagrammatic symbolic elements. They are populated by a cast of characters that may have haunted him since childhood: the red and white cat that appears to be a little man in a cat suit; the crescent moon with summarily drawn facial features; the male character with a bluish planet earth on his shoulders; the young girl whose face sometimes cannot be recalled; the paper-doll children on their way through the image hand in hand; the ghost; death; the silhouette of a wolf standing on the church roof at dusk.

A mystic and a realist, Bruno Knutman is both painstakingly faithful to his sources and unpredictably expressive. He does not believe in the ‘pure’ image. His art formulates a world-view and speaks in images. It is therapy. This is perhaps most visible in the drawings, many of which are based on photographic sources. They also remind us that Bruno Knutman used to be labelled a pop artist, although it would be more accurate to call him perpetually non-classical.

Time is the raw material for his self-reflective images: the distant and more recent past, the present and, indirectly, the future. The self could hardly engage in any conversation if it were outside of time. In Bruno Knutman’s hands painting becomes an efficient tool for portraying time both as history and as inner, subjective reality. The artist himself has written: ‘We give time a nudge, and then we wait.’