Lunds konsthall Production is a three-year project featuring younger artists from our own region. The basic idea is to offer the possibility to produce and present new works. This series was inaugurated in 2008 with a Luca Frei and continued in 2009 with Sirous Namazi. It is now concluded with three female artists. 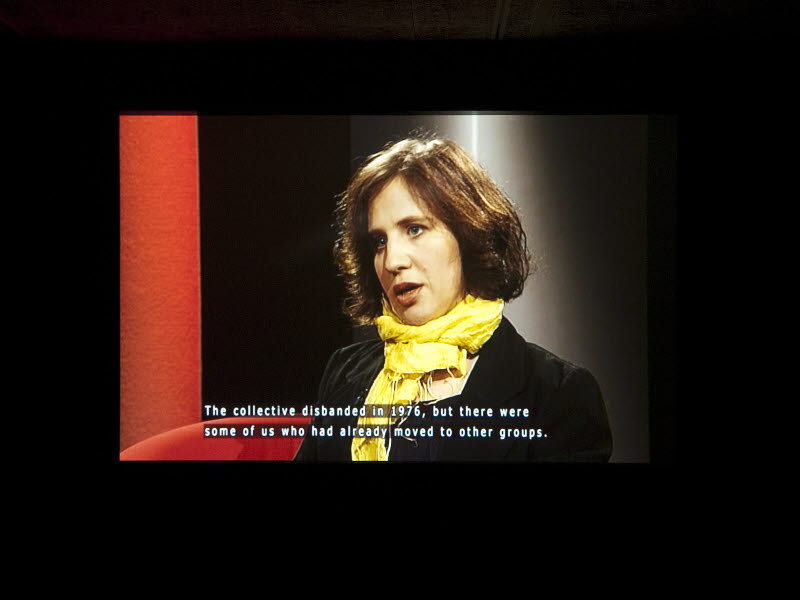 There are several reasons to describe Petra Bauer, Kajsa Dahlberg and Maria Lusitano Santos as politically engaged feminist artists. They use the moving image to portray and influence contemporary social phenomena. Their works are often about women: their lives, their self-esteem, their possibilities. They also problematise other controversial issues, such as militarism, religion or the status of minorities. But all three of them also allow their practice to be continuously shaped by the aesthetic and formal challenges posed by the subject-matter and method they have selected. The exhibition aims at making visible the field of tension around such art-specific approaches to societal themes.

Petra Bauer was born in Malmö 1970 and graduated from the Malmö Art Academy 2003. She has participated in many international exhibitions, among them the project Becoming Dutch at the Van Abbe Museum in Eindhoven, the Netherlands, 2007–09. She is showing two works. For Conversation: Stina Lundberg Dabrowski Meets Petra Bauer, 2010 (video, 30 min) she was interviewed as a singular artistic subject, but she is showing extracts from collective film productions of the 1970s (by London Women’s Film Group and Berwick Street Film Collective). The film was co-produced with Focal Point Gallery in Southend-on-Sea, England. Rana, 2007 (video, 57 min) is the fictionalised story of a young Muslim woman in Malmö, based on a newspaper article about a real event.

Kajsa Dahlberg was born in Gothenburg 1973, graduated from the Malmö Art Academy 2003 and completed the Whitney Program in New York 2008. She has been internationally visible, notably at the Athens and Prague biennials 2007. She is showing three works. No unease can be noticed, all are happy and friendly (Postcards from Jerusalem, 22 December 1911 – 24 January 1999), 2010, is an installation of around 500 postcards mirroring the reactions of Swedish-speaking visitors to the contested city. The Femø Women’s Camp 2008: Film and Contract, 2008 (installation with text and video projection, 15 min) gives an intellectual and emotional picture of a feminist project by presenting its agreed preconditions (the contract) and its physical dismantling (the film). 20 Minutes (Female Fist), 2006 (video, 20 min) is an interview, shot with the lens cap on, with a Danish activist telling us about an attempt to create pornography by and for lesbian women.

Maria Lusitano Santos was born in Lisbon 1971 and graduated from the Malmö Art Academy 2003. She is well known in her native Portugal and has participated in a range of international exhibitions, among them Manifesta 5 in San Sebastian, Spain, 2004. She is showing two works. The War Correspondent, 2009–10 (two-channel video, 46 min; screenings at Lunds konsthall will be starting on the hour) is a many-faceted meditation on the image of war in the news media and the entertainment industry. The narrative is pieced together from a richly varied repository of material from illustrated newspapers, films and the internet. It begins with the creation of modern war reporting during the Crimean War in the 1850s. Private Anatomies, 2010 (video, 12 min) is an essay and interview film about childhood, what we remember of it and what we repress.