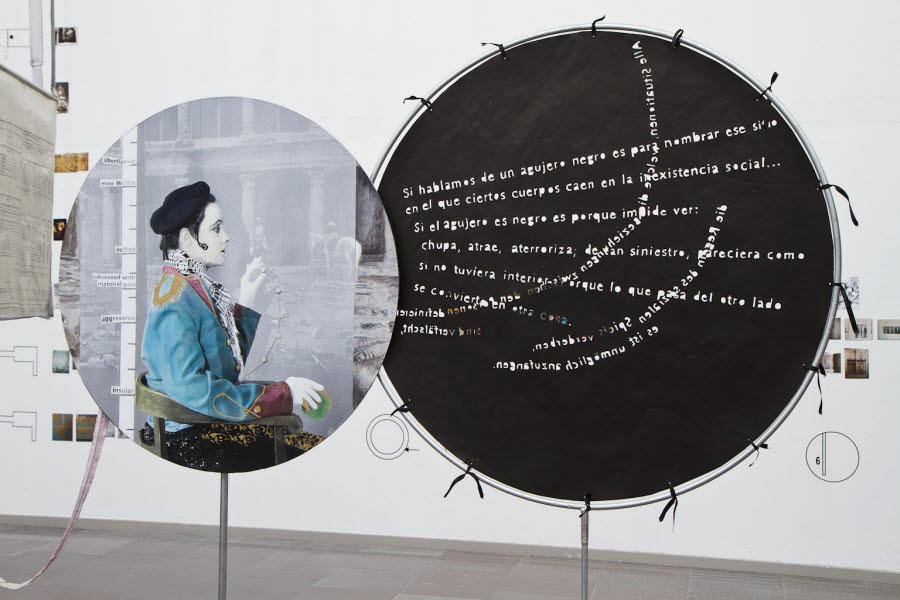 In the 19th century Karl Marx gave an account of the cotton trade, tracking fifty years of boom and bust and the effects this had on workers in Britain and its colonies. This exhibition cross-references different accounts of textile history, focusing on works by the two contemporary artists Alice Creischer and Sudhir Patwardhan, which are presented alongside an extensive range of recent and historical archival material.

Alice Creischer's large-scale installation Apparatus for the Osmotic Compensation of the Pressure of Wealth during the Contemplation of Poverty (YEAR) tracks the threads that connect cycles of investment, disinvestment and decline. Inspired by a trip to India, the work looks at the economic and social impact of European colonialism and the subsequent globalisation. The craze for Indian Chintz caused protest amongst Spitalfields weavers in 1719, but one century later the restrictions on imports to Britain and the flooding of the Indian market turned India from exporter to an importer and devastated whole sections of its textile industry. This led to Gandhi's choice of the spinning wheel as a symbol of decolonisation, and caused Nehru to comment that 'the history of cotton and textiles is not only the history of growth of modern industry in India, but in a sense it might be considered the history of India.'

Since the mid-1970s Sudhir Patwardhan has depicted Mumbai and its urban proletariat. His painting Lower Parel (2001) shows 'Girangaon' (Mill Village) where the cotton mills that transformed the city's economy and led the Indian industrial revolution were located. By the 1970s textiles employed one in three of the Mumbai's workers and sucked in migrants from surrounding regions. New social institutions evolved with forms of cultural expression including street theatre, poetry and music. It was a hub for trade union activity and left politics. Lower Parel depicts this area after the mills closed following the 1982-1983 strike, the largest and longest in history. It superimposes different urban strata - defunct factories, new small-scale enterprises and high-rise luxury apartments - and invokes the workers' struggle to keep the mills going and resist gentrification.

References in these works are developed through an extensive display of archival loans and artists' interventions, including Company Paintings, Indian Chintz, Karl Marx's journals, films, photographs, newspaper articles and recordings of mill workers testimonies. A curtain and two support structures, a table and wall unit, have been designed by artist Céline Condorelli to display the archival material.