Lunds konsthall presents Open Eye Policy, the most comprehensive solo exhibition to date by the renowned Indian artist Sheela Gowda and the first major presentation of her work in Sweden. It features sculptures, large installations, paintings and photographs from the last twenty years. 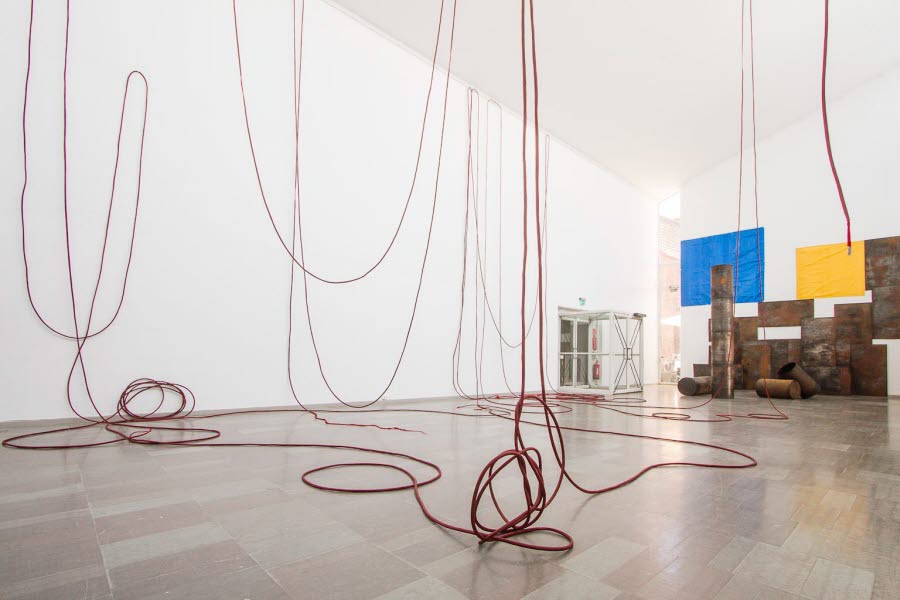 Curated by Grant Watson in collaboration with Annie Fletcher and originally shown at the Van Abbemuseum in Eindhoven, the Netherlands, Open Eye Policy has now been adapted to the distinctive 1950s architecture of Lunds konsthall.

Sheela Gowda was born in 1957 in Bhadravati, in the south Indian state of Karnataka, and lives in Bangalore. A graduate of art academies in India and the UK, she emerged in the 1980s as a figurative painter. In the 1990s her work developed towards the elegant and thought-provoking sculptures and installations for which she is best known. Gowda balances formal composition, theatrical staging and an innovative use of unexpected materials. While her practice suggests a preoccupation with abstraction, it also reveals her continuous and nuanced engagement with society, politics and the environment.

Gowda often works with distinctly pre-industrial materials such as cow dung, thread, string, and wooden chips – but also with ‘waste’ from the frantic economic activity in today’s India such as the steel tar drums and plastic tarpaulins used for road construction. These are all thoroughly transformed and subverted in the situations she creates to display her work. She treats images, usually taken from the news media, in much the same way: as support for her subtle but efficient critical manipulations of what we think we see, and also what we expect from ‘formalism’ in art.

Open Eye Policy juxtaposed works from different periods and in different materials and scales, to articulate an understanding of Gowda’s multi-faceted but consistent (and consistently unpredictable) practice. Among the earlier works representing her use of cow dung is My Private Gallery (1998–1999), which also features a selection of watercolours – a medium she has returned to in recent years.

For the large installation And… (2007, a version of And Tell Him of My Pain, 1997) Gowda uses thread, glue and red pigment to make the ropes that coil through the exhibition space. Kagebangara (2001) is made with materials acquired from the workers building the roads that underpin economic growth, whereas Of All People (2011), another large-scale installation, is more ‘domestic’ in its theatrical use of furniture and window frames to create what Gowda calls an ‘immersive landscape’ for the little wooden chips that are actually votive offerings with rudimentary human features.

The political is ever present as an undercurrent in Gowda’s practice, and her rarely seen works on paper from recent years bring this to the surface. The exhibition at Lunds konsthall includes a number of these, such as Crime Fiction (2008) and Protest My Son (2011).

Lunds konsthall warmly thanks Sheela Gowda, Grant Watson and Annie Fletcher for their strong commitment to the exhibition. We also thank all the lenders, including Sheela Gowda herself. Without their generosity, this exhibition and its tour would never have happened.