Public Address: Goshka Macuga Tapestries. Lunds konsthall is very pleased to show an exhibition by the internationally renowned artist Goshka Macuga, who was born in 1967 in Warsaw and has lived in London since 1989. 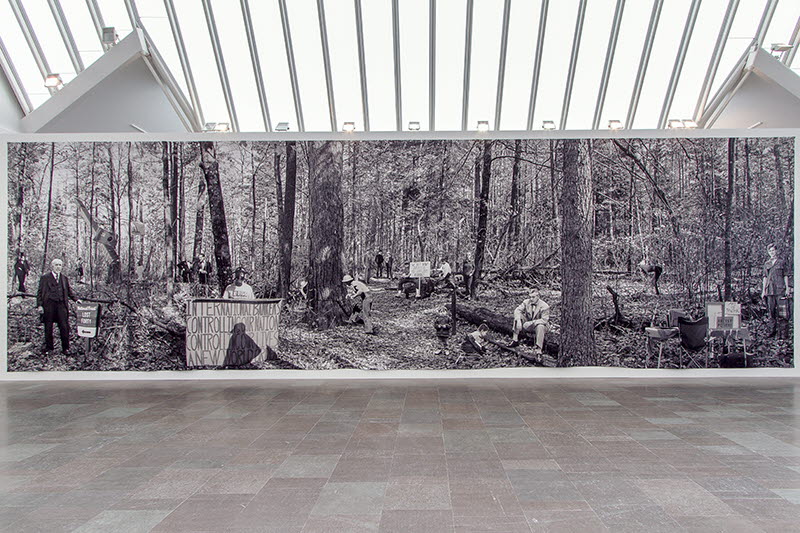 Macuga enquires about how art can be used to comment on current concerns and influence public debate. Her point of departure is always extensive and in-depth research. She uses books, films, press cuttings, letters and other archival material, while also selecting pieces from museums and other collections and annotating works by other artists.

The exhibition Public Address brings together, for the first time, six large photographic tapestries by Macuga, i.e. most of her works in this medium. The exhibition emphasises the public, political character of her tapestries and presents them together with a series of texts, which were either authored by her or commissioned from other writers.

These texts help to decode the different pictorial elements and to make Macuga’s research, opinions and stated intentions accessible to the viewers. In previous exhibitions the written element was made available in a pamphlet or similar format but here the texts come to the fore as part of the installation.

In recent years Macuga has produced a series of large-scale tapestries that can be seen as lightweight and portable public murals made with thread. They were made for the Venice Biennial (2009), M HKA (The Museum of Contemporary Art Antwerp (2010), the Walker Arts Centre in Minneapolis (2011), dOCUMENTA (13) (2012) and other events or venues.

Macuga is particularly interested in working with this medium’s representative function (which historically has been exploited by institutions from royalty to the trade union movement) and its ability to modify architectural space. Holding up a mirror to the institutions that host them, her tapestries reveal the diverse elements that go into the making of the complex organism that is a museum or a biennial or an edition of Documenta. This includes its history, its public statements, its sources of funding, its intentions, its personalities, its audiences, its contradictions and mistakes.

The most recent work in the exhibition is a new commission, which is not a tapestry. It roots the institutional question in a local context by responding to the specific history of Lunds konsthall. Printed information relating to the ongoing debate about the institution and its programme is displayed on a notice board. Its sheer volume reflects the extent to which this discussion has occupied politicians, journalists, the art world and the general public, and how this has been played out across the pages of the regional newspapers.

The crux of the argument which has run for more than fifty years is between the artistic independence of the institution and its international scope on the one hand and questions of accessibility and local accountability on the other. Macuga’s new work demonstrates how cultural institutions can become hostage to political campaigns, but also their symbolic importance for a city and its civic life, as both a subject of and a conduit for public debate.

Macuga’s most recent solo exhibitions were organised by leading institutions such as the Museum of Contemporary Art in Chicago (2013), the Walker Art Center in Minneapolis and the Zachęta National Gallery of Art in Warsaw (both 2011), Whitechapel Gallery in London (2009) and Tate Britain, also in London (2007). She also participated in dOCUMENTA (13) (2012), in the 8th and 5th Berlin Biennials (2014 and 2008) and in the São Paulo and Liverpool biennials (2006). She was awarded the Arnold Bode Prize in Kassel in 2012 and she was nominated for the Turner Prize in London in 2008.

Lunds konsthall warmly thanks Goshka Macuga. We also warmly thank Grant Watson, the curator of the exhibition, and all the lenders for their contributions to the exhibition: Castello di Rivoli Museo d’Arte Contemporanea in Turin, Nicoletta Fiorucci in London, the Fondazione Prada in Milan, Galerie Rüdiger Schöttle in Munich and Whitechapel Gallery in London.