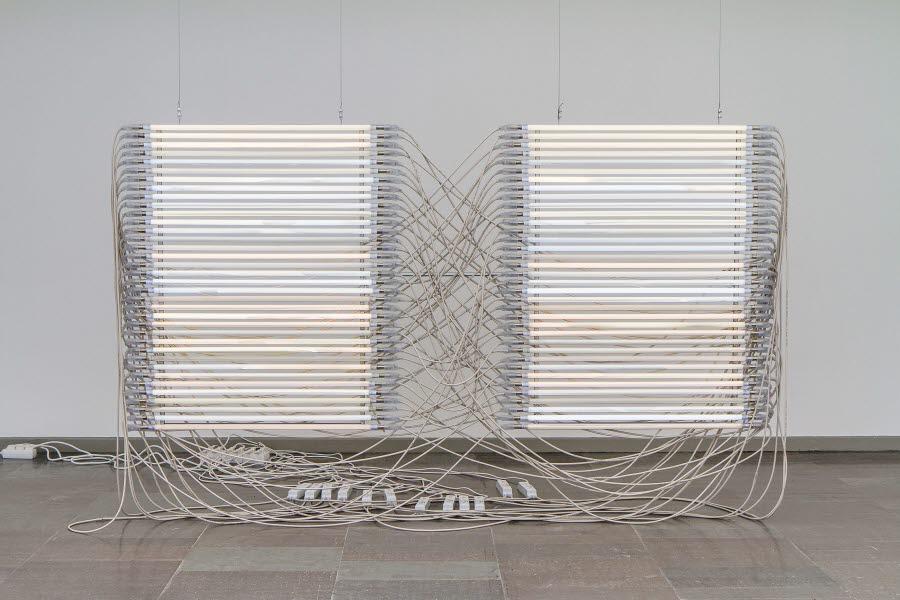 We are very pleased to be able to show Nina Canell, an artist who has enjoyed international recognition for some time but until now has exhibited relatively rarely in her country of origin. We have chosen to show Canell together with Eric M Nilsson, a documentary filmmaker whose outlook is rather idiosyncratic.
The two exhibitions are separate, with their own catalogues and posters, but they also relate to each other. It was Canell who initiated this encounter, and together with Robin Watkins she has emphasised certain convergences between herself and Nilsson in this purposely selective group of films.

In the exhibition on the ground floor we see how Canell uses recognisable materials and objects removed from their usual context. It might be some copper piping, a chewing gum or a bit of cable. Apparently unexpected objects in this context, leaving behind a sense of absence that create a space for thought. Canell herself states that she is interested in the forces that influence our lives but often remain intangible to us. Perhaps this explains why immaterial and ephemeral elements such as gas, electricity and sound waves appear so often in her work.
Nilsson is best known for the many experimental and groundbreaking documentaries that he has produced since the 1960s, for Swedish Television and other commissioning organisations. His works are shown on the first floor of the gallery, but the presentation was not conceived as a comprehensive retrospective. Instead there are just a handful of films, which help us to find connections between the means of expression that otherwise make the two artists’ oeuvres different. In Canell’s installations, as in Nilsson’s films, a certain kind of focussed observation recurs, allowing free association to find its own path and its real power.
Thanks to Nina Canell’s gallerists Wien Lukatsch and Daniel Marzona in Berlin and Mother’s Tankstation in Dublin.

Nina Canell, born in 1979 in Växjö, lives in Berlin. Educated at the Institute of Art, Design and Technology at Dún Laoghaire, Ireland. She has exhibited in many prestigious institutions during the last years, among them Camden Arts Centre in London, Midway Contemporary Art in Minneapolis, Hamburger Bahnhof Museum in Berlin, Palais de Tokyo in Paris and Museum of Modern Art in New York, as well as at the Sydney Biennial in 2012, at the Liverpool Biennial in 2010 and at Manifesta 7 in Rovereto, Italy, in 2008.

Eric Michel Nilsson, born in 1935 in Brussels, lives in Stockholm. Educated at the IDHEC film school in Paris, contemporary with Alain Resnais, Jean-Luc Godard and Louis Malle. He has produced a number of documentary films for Swedish Television. Recipient of the Bo Widerberg grant in 1998, the Golden Antenna prize in 1996 and the Swedish Guldbaggen prize in 1978.
Curators: Åsa Nacking and Nina Canell.