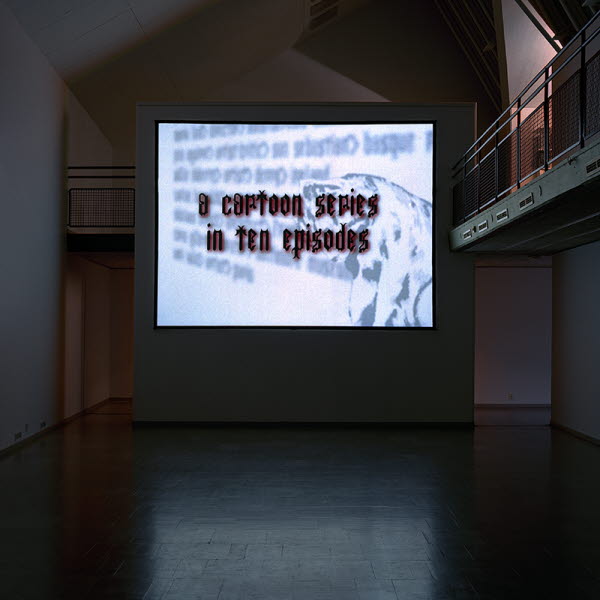 The exhibition has been produced in connection with the interdisciplinary, Third Space Seminar: Examining the Law, a collaborative project involving the universities of Lund and Malmö as well Lund konsthall. The seminar will be held during the opening weekend of the exhibition, 26-28 November 2004.

In answer to the invitation to reflect on the theme of Law and Creativity, which forms part of the seminar, Liam Gillick and Philippe Parreno have chosen to produce an animated film entitled Briannnnnn and Ferryyyyyy, a cat and mouse story in which the characters are reminiscent of their counterparts in cartoon films. The narrative finds its point of departure in the classical dichotomy between art and jurisprudence represented by the notion of copyright. Liam Gillick and Philippe Parreno asked a number of advisers to share their experiences of encounters between art and the legal system and their contributions have been woven into the narrative of the film. The film was produced in two very similar versions which are being shown in the front and back rooms respectively. One version is oriented towards a Swedish audience and the other towards an English audience and there are subtle pokes at the cultural differences between them.

The seminar intends to look at the law from four different perspectives: Law and Difference, Law and Guidance, Law and Media and Law and Creativity. From the point of view of art, it is the relationship between law and creativity that will be considered. Creative activities can almost seem bound to transgress some sort of system of rules. When art diverges from aesthetic conventions, transgresses norms or contravenes the laws of the nation, this is often seen as creativity's constant struggle against oppressive rules. But what are these written and unwritten laws in a constantly shifting world full of the struggle for power? Why should we obey laws that the leading figures in the political and financial spheres openly disregard? And what are the consequences of civil disobedience? Modern and post-modern art has regularly taken up a position in opposition to all religious, political, patriarchal or overly conventional systems. Yet are creativity and the law necessarily in opposition?