Lund Konsthall is pleased to present Danish artist Pia Rönicke’s first substantial solo exhibition. It makes full use of the kunsthalle and contains work produced between 1998 and 2006. A catalogue is published for the exhibition, with picture documentation and an essay by the kunsthalle’s new Acting Director Anders Kreuger. 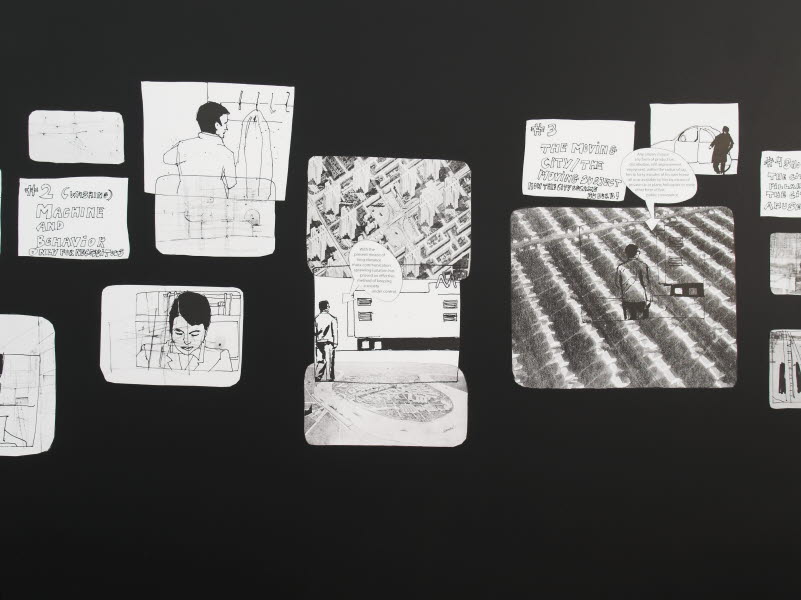 Pia Rönicke is concerned with urban realities and fantasies. She continuously investigates how we as ‘users’ can influence (and are influenced by) what urban planners, architects and designers do. She has studied 20th century utopianism, how it looks ‘on paper’ and ‘in reality’. The exhibition traces the development of Pia Rönicke’s practice through various modes of narration. She has worked with purely visual formats like computer-aided animation, and she has staged situations and documented them in images and text. Increasingly, she also scripts, directs and produces films.

Pia Rönicke’s new film Zonen (‘The Zone’, 2005) is premiered at Lund Konsthall. It shows three young Danish architects (Tue Hasselberg-Foged, Kristoffer Lindhardt Weiss and Sinus Lynge) on a visit to a site they have proposed to transform into a town for 20,000 people. The film is based on their theoretical jargon, and becomes a commentary on the relation between ideas and their realisation. Some infrastructure is already in place in the Zone, but it is strangely suspended between the real and the fictional, the past and the future.

In her practice, Pia Rönicke interprets what is going on in contemporary society from her specific point of view. Who benefits from the grand utopian visions of societal development? Can we influence the changes our surroundings are undergoing? How will the future look? Can we see glimpses of it in an artist’s vision? Welcome to Lund Konsthall to see how Pia Rönicke tackles these issues.

Pia Rönicke (b 1974) lives and works in Copenhagen. After graduating from the Royal Danish Art Academy in Copenhagen and California Institute of the Arts in Los Angeles she has worked in the Nordic region and internationally. She has exhibited at Moderna Museet in Stockholm (2001), Tate Modern (2005), the Nordic biennial Momentum 2 in Moss, Norway (2000) and the European biennial Manifesta 4 in Frankfurt (2002).