Rabih Mroué. I, the Undersigned

It is with particular joy that Lunds konsthall presents the exhibition I, the Undersigned. In these days of profound change and hopefulness in the Arab world we are very proud to be able to show the first-ever solo exhibition by the internationally renowned Lebanese theatre director, actor and artist Rabih Mroué. 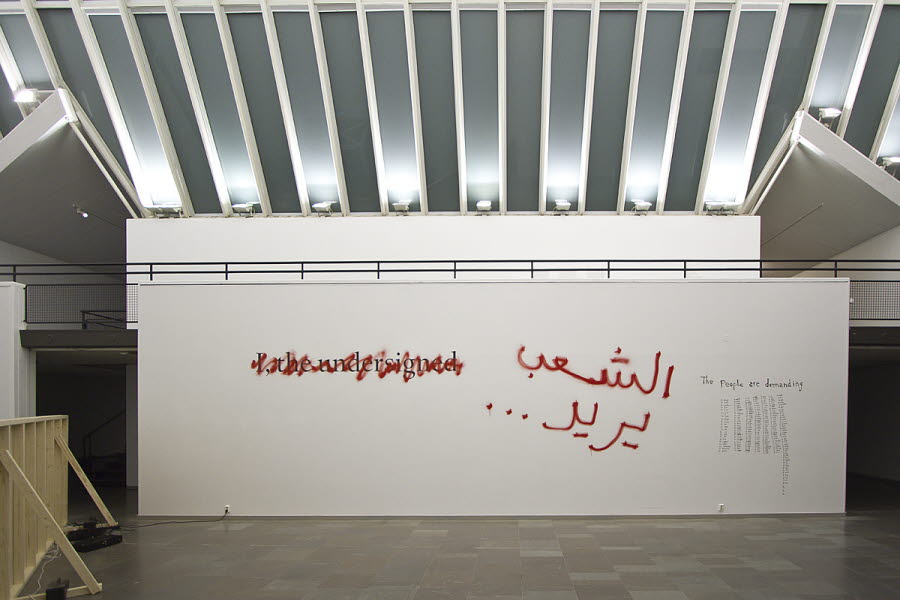 Curated by Cosmin Costinas, this exhibition is produced by BAK, basis voor actuele kunst in Utrecht, the Netherlands, where it was premiered in the summer of 2010. It is travelling to a number of international locations in 2011 and 2012. The exhibition has been somewhat changed for Lunds konsthall. Not least importantly Mroué is producing an entirely new work – so new, in fact, that it does have a title quite yet.

Rabih Mroué’s art roams the boundaries between the narrative and the visual, between things that require special attention (including the patience to listen and read) and things that can only be experienced here and now, with all senses. He articulates sophisticated political consciousness and hands-on experience of the political, but in doing so he starts from the personal, which does not conform to any given ideology, at least not in the long run.

The exhibition borrows its title from one of the works, from 2007, in which Mroué offers a public apology for what he himself did during the civil war in Lebanon, lasting from 1975, when he was eight years old, until 1990, when he became twenty-three. The video could be considered emblematic of his practice, which is grounded in the directness and physical presence of theatre and performance art but also presupposes textuality. I, the Undersigned demonstrates how a skilled and sensitive actor can create meaning with subtle phrasing, in dialogue with a well-written text.

Like Mroué’s other videos, video installations or text and sound compositions this casts light on the complex and often brutal recent history in what we usually call the Middle East. Yet he does not treat his own experience of a long-lasting and labyrinthine conflict as something specific that an outsider could never understand it or identify with, and thereby as something exotic that cannot really threaten us. ‘I, the Undersigned’ can be anyone of us who tries to take responsibility for his own actions and – no less importantly – his memories of these actions.

The following other works were featured in the exhibition at BAK and will also be shown at Lunds konsthall: Old House (2003), On Three Posters. Reflections on a Video Performance by Rabih Mroué (2004), With Soul, with Blood (2006), Noiseless (2008), Grandfather, Father and Son (2010) and Je veux voir (2010), the latter two produced by BAK.

Lunds konsthall has translated Mroué’s works into Swedish. One reason for this is that our own audience should be able to feel that the lives reflected in the exhibition might have been our own – that a well-to-do, secure and progressive existence, for instance in Beirut before the hostilities began, can be pulverised before there is time to react.

We have also chosen to print most texts from the exhibition in the catalogue, in both Swedish and English. This is meant as a service to our visitors, so that they might read and re-read the wall texts and video scripts at their own leisure, and also as a way to advertise the writerly qualities of Mroué’s art. His writing normally appears in symbiosis with other forms of expression, but it also deserves to be enjoyed on the printed page.