Poul Gernes (1925–1996) was born in Copenhagen and lived in southern Sweden for thirty years. Until now his art has not been comprehensively presented in Sweden, although he is considered to be one of Scandinavia’s most significant artists. Yet Gernes has had a posthumous international break-through in recent years, not least because of the generous selection of his works at documenta 12 in 2007. 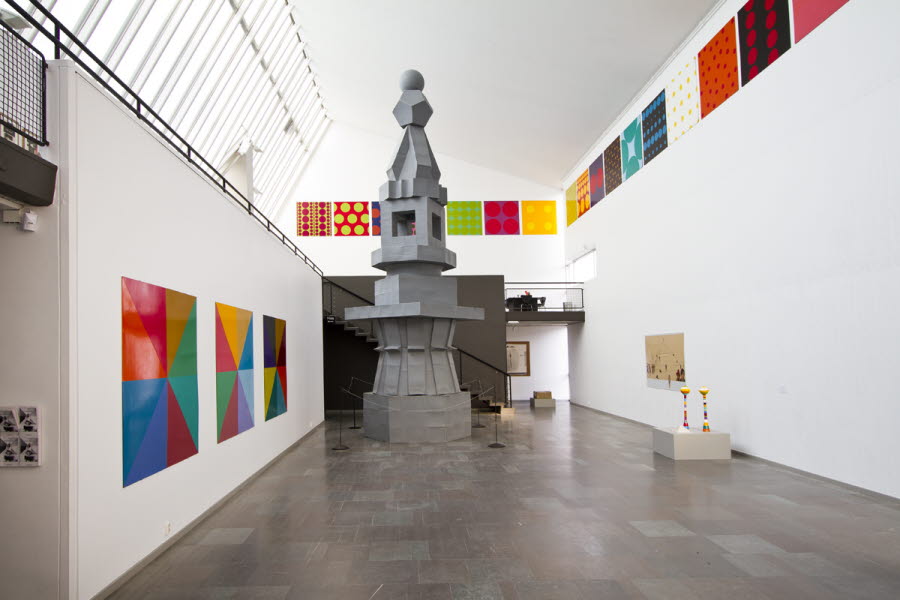 This retrospective is produced by Deichtorhallen in Hamburg. In order to have enough space for the various aspects of Gernes’s wide-ranging, complex and influential practice Lunds konsthall and Malmö Konsthall are now mounting the exhibition as a joint effort. It encompasses Gernes’s entire careeer as an artist, from the previously unknown figure and landscape studies of the 1940s to the stylised, large-scale floral motifs of the 1990s. The perhaps most characteristic work is the image series from the 1960s and ‘70s, poised somewhere between minimalism and pop art and offering variations on basic geometric shapes, lettering and shooting targets.

At Lunds konsthall the audience encounters works made until the mid-1960s, while Gernes’s later production is shown at Malmö Konsthall. In addition, a series of 2 x 7 paintings is on display in the Lund City Gardens and the Magistrate Park outside Malmö Konsthall. These are replicas of Gernes’s originals, produced specifically for this exhibition and as part of the project Sommarlund.

Poul Gernes’s legacy is impressive. He moved freely between painting, sculpture, design, performance, film and social activism. From 1968 onwards he worked intensively with public art, authoring over 150 projects mostly in Denmark. His belief in art as a positive, transformative power in society was foundational and unwavering. Yet he continuously questioned the notion of art, undermining commonly held beliefs about the use of various materials, the incorporation of everyday actions or the reliance on industrial production processes. Gernes was never afraid of being provocative. At the same time he had great respect for traditional craft and advocated an accessible art with strong popular appeal.

At the beginning of his career Gernes supported himself by teaching art to young women. In 1961 he joined forces with the art historian and Slavic linguist Troels Andersen and founded Den Eksperimenterende Kunstskole (‘The Experimental Art School’) in Copenhagen. The school soon became an indispensible part of the Danish art scene and nurtured a whole generation of avant-garde artists. It soon abolished all difference between teachers and students to become a site for collective, socially engaged experimentation. ‘Eks-skolen’ existed until the early 1970s. During his last decade, Gernes was Professor at the Royal Danish Academy of Fine Arts in Copenhagen, in the department of mural painting and public art.

Gernes was well acquainted with the European and American avant-garde and moved easily between genres and traditions. This partly explains the subversive streak of his art, which at the same time radiates a severe and idiosyncratic beauty. He infuses two- and three-dimensional images with human experience and passionate convictions about how society should be built. Poul Gernes has inspired many of today’s young artists. This is hardly surprising, since the unorthodox use of different means of expression and forms of communication has become a constitutive characteristic of contemporary art.