The summer exhibition at Lund Konsthall shows items by four artists who work in a contemporary urban environment or in the media. The developed, modern society is fundamentally an urban society concerned with information. But it is also the sum of the people who inhabit it and the room for action which they are able to create for themselves. 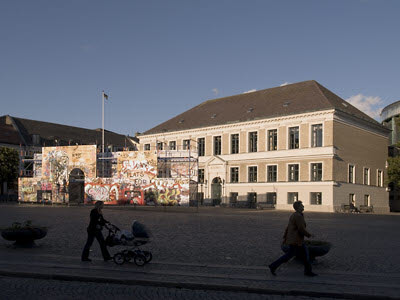 The title of the exhibition, Offentlig handling (Public Act), alludes to a duality of meaning - on the one hand the act in the form of a private individual's action in the public domain on the other the document which is in the public domain and which, therefore, everyone has the right to consult. The concept carries within it the experience and dynamic between what a citizen wants and is allowed to do as opposed to the strategic value that means that access to other information can be limited by restrictions and laws.

The works shown in Offentlig handling will activate the Lund Konsthall both by offering comments and inviting to discussion. They will occupy the gallery while simultaneously and equally encouraging the visitor to leave it to seek out the works that are actively engaged in investigating Lund as urban space. Besides the local perspective - several of the works have been produced specially for Lund and Lund Konsthall - other works emphasize a current, large-scale aspect which assumes a global perspective.

Lara Almarcegui is concerned with drawing attention to neglected sites in the urban environment, sites that fall outside the framework of urban planning in that they lack any obvious purpose or specific design. Expressly for Lund she has produced two new works: Guide to undefined places in Lund in the form of a map and a textual work entitled Lund - construction material, a list that indicates the extent and density of the material elements that together form the urban core of Lund.

Åsa Sonjasdotter's works start from a specific place or situation around which she creates a framework for the thought processes and discussion within the special group that the work involves. In connection with the exhibition, on 24 May from 7 to 9 pm Åsa Sonjasdotter will act as moderator for a discussion under the rubric Fri talan och stadens rum (Free speech and urban space) to be held at the gallery with invited speakers from Lund. Working with architect Tanja Jordan and after discussion with the Municipality of Lund, Åsa Sonjasdotter has been granted permission to show the work Fri talan (Free speech) an erected wall in front of the town hall in Lund. For a number of weeks in May Fri talan will present the views of the citizens of Lund.

In his installations Sean Snyder makes use of photography, video film and text assembly to investigate the media, architecture and the urban environment as representatives of economic and political structures. By re-using existing materials and by undertaking research in public archives Snyder's works define the visual codes that influence the built-up urban environment and media space.

In his works with their documentary characteristics, Darius Ziura focuses on a detailed description of a geographical place while developing a larger, coherent work using photographs and video film based on that place. In this exhibition Darius Ziura is showing Gustoniai, a video project in which the artist, over a long period, filmed minute-long portraits of all the people living in a Lithuanian village of the same name.