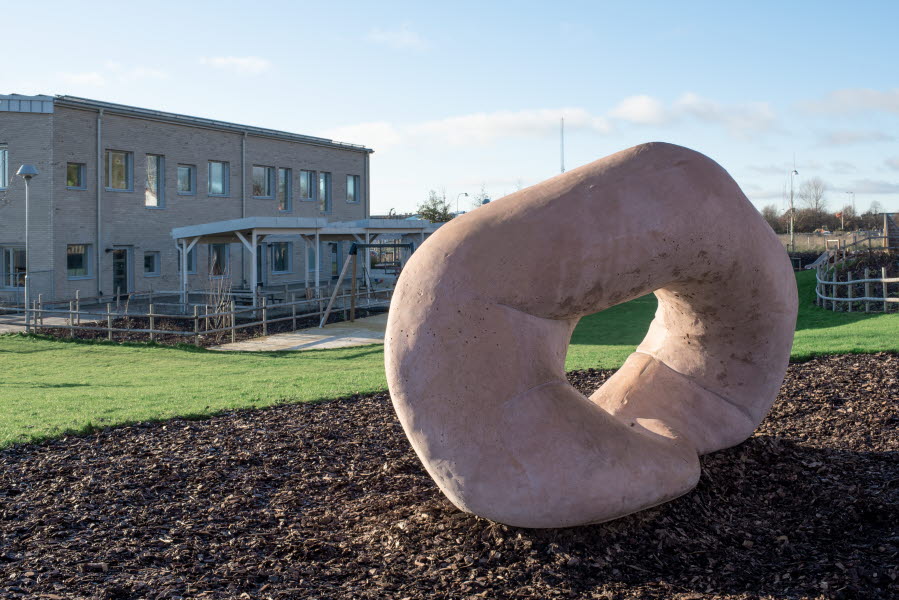 In her practice Marie Bonfils has focused on the sensing and acting body. Before acquiring language, the child explores the world through tentative sensorial experience. Something that will become an individual consciousness emerges and finds its own way of being in the world.
Bonfils’s sculpture for the Guldåkern kindergarten was informed by observations of her own children. ‘I took, as a point of departure, my own story as a mother of three children. I wanted to make a sculpture leaning on my own sensorial memory, seen from the perspective of both the child and the mother/parent. I wanted to create a sculpture that acts both as a child and an adult, that is both serious and humorous, both soft/round/curved and solid’, Bonfils explains.
She joins the proud Scandinavian tradition of play sculptures, which started with Egon Møller-Nielsen’s Tufsen in the late 1940s. What was at stake also for him was to experience and re-experience the child’s appropriation of its surroundings through bodily movements
Portal Immortal is a round portal, an expanding void that you can sit in, see through and crawl on. It is equally an enlarged doughnut and a piece of park furniture. The slightly twisted loop with its creased curves alludes to softness, as if it were made from upholstered textile or swelling dough.
A doughnut, a music box, a streamed children’s programme, striped clothing and floral nappies – everything becomes part of the young mind’s attempts at orientating itself in a world of objects. It is a reality that presupposes the constant exchangeability of new objects. The fundamental premise of the global production apparatus is eternal renewal. That it extends to a biosphere that is not based on immortality and eternal renewal is one of the belated discoveries of our times.
In Bonfils’s public work this doughnut has also crash-landed in an idyllic area of detached homes, not far from the city centre. This part of Södra Råbylund is a sector of Lund where elements of rural life have lingered. Yet it is rapidly being turned into something more urban, with new bocks of flats being planned together and with the aquatic touch of walking paths leading towards an artificial lake. The thrown-in dough circle adds an element of humour, pop and absurdity to the well-behaved landscape.

Marie Bonfils, born in Copenhagen in 1978, lives in Copenhagen. Educated at the Malmö Art Academy in 2010–15.